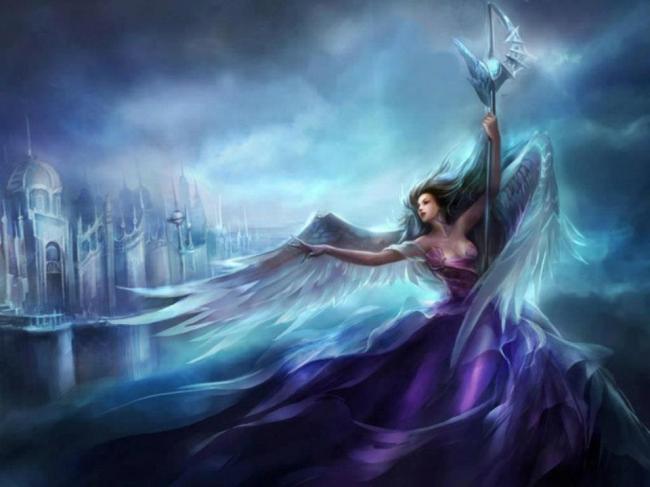 Once in the kingdom of God there was a meeting between Angels and fairies.  The meeting was clearly observed by a well known and powerful  , evil witch who used  to peep around the kingdom so that she could  attain the supreme power of God and rule the whole universe.

She knew the meeting was to talk about how toweaken the loads of evil witches on earth who were roaming around in the form of humans especially in the male body as they knew they were quite easily traceable in female body especially in Rome.

God had loads of list of complaints from his dear children  and the meeting was to resolve this issue. The powerful witch named Leona knew about it and casted a spell with her powers and created a fight between Angels and Fairies that resulted in animosity in the God’s Kingdome. The fairies who were already egoistic by nature decide to leave the kingdom when God kept on agreeing to what angels had to say.

The meeting was adjourned and Fairies left with a red aura of anger around. Obviously! They were angry… Even though the arch angels tried to stop Fairies from flying away but it was too late by that time. 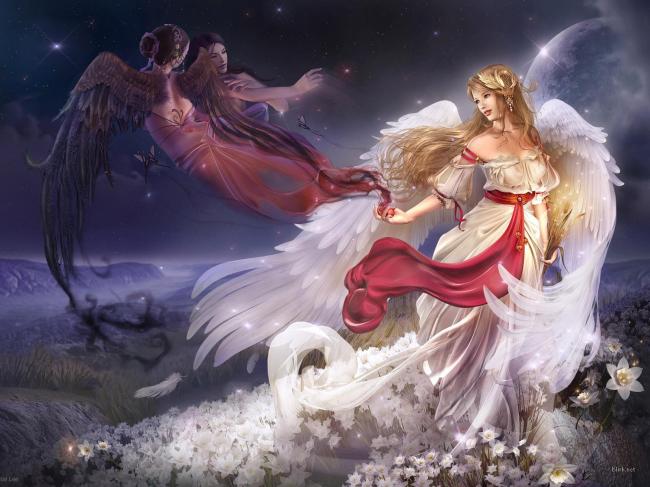 The two fairies that were there to represent fairy kingdom (Abby and Molly) and to talk on the issue were punished to take birth in Rome where maximum attacks of evil witches were on till they realized their mistake and apologies to God for their negative behavior. The two fairies flied to Fairy God mother explaining to her that they did not realize how it happened and they believed it was an evil witch who casted this spell but they do not have any proof of that.

They both sat together and cried , promising each other that they would never leave each other’s side and would always love each other and pass this test to be back in fairy kingdome 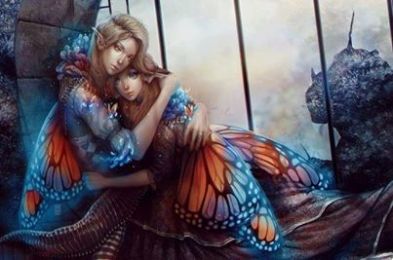 The fairy God mother was very upset with the news but she could not undo the command of the God. She had to let them go. The two most loved, intelligent, powerful and liked by all fairies had to leave the fairy kingdom.

In order to lead a life of a human their memory was washed off but they forgot to take their powers from them.                                  Abby and Molly took birth as twins in rich family staying in Rome. The girls grew up
with the time and since they had no knowledge that they were fairies they were
leading a normal life. Obviously, The fairy god mother used to check the
progress of her two most loved fairies in her magical mirror called Moon . 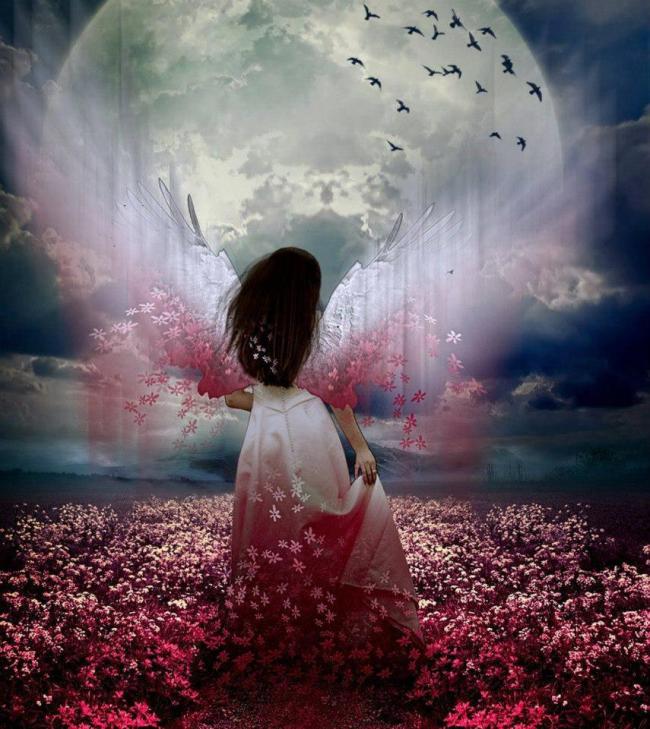 Abby was more into singing and playing flute. She enjoyed singing and dancing at the same time in the garden nearby. Through her singings the flowers used to dance along and all the garden of the village nearby  Rome were very beautiful and everyone could notice that. 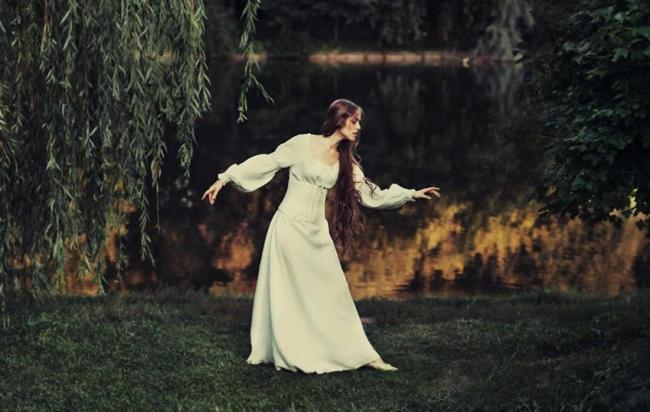 Whereas Molly enjoyed her swings in the garden. She was more into love with the nature and often felt the connection. She enjoyed decorating her swing with flowers. Children used to enjoy her company as she was very communicative and often used to create wonderful magical stories for kids 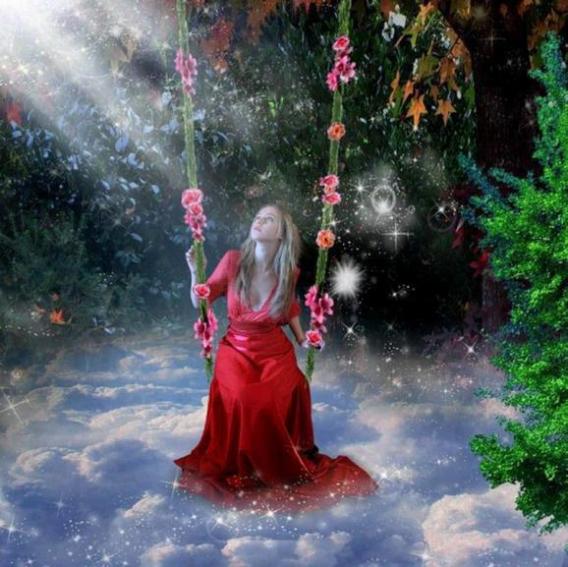 Their parents often used to thank god for the beautiful , loving and intelligent girls God  had given  them and was engrossed in searching for a good match for both of them. However, girls were busy enjoying nature and motivating others to love nature and have more plants and flowers in their gardens after all they were Fairies.

This was also observed by Leona the powerful evil witch who casted a spell on themso that she could take all the powers and rule universe and get them out from God’s and Fairy kingdom. After all , she knew that both the girls were powerful  and  could help angels to trick and get all the evil witches from earth. All was going well, when she  decided to send a  male witch to kill them in the form of a suitable match for Abby.

Yes, he was a witch and his motive was nothing but to undo the progress of both the fairies so that could not pass their test to enter the fairy land again. His name was Arnold. 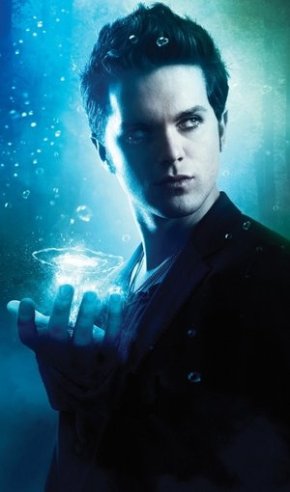 Arnold was a handsome rich man. He targeted Abby on request of a witch and started being friends with her. He used to meet her during sunset time as he was at his best at that time and often people used to run back to their respective houses as they were scared of the evil witches, but Abby and Molly were courageous and they had never believed in such stories.. Abby liked Arnold and soon this liking turned into love Time passed by,Abby fell in love. Arnold had won Abby’s trust now he could easily get into their house and kill the whole family. After all, Devil knows what he was doing.

Abby  was in love, the fairy god mother tried her best to give her hints by impressing her thoughts but she was so much in love that she was blind to indications. 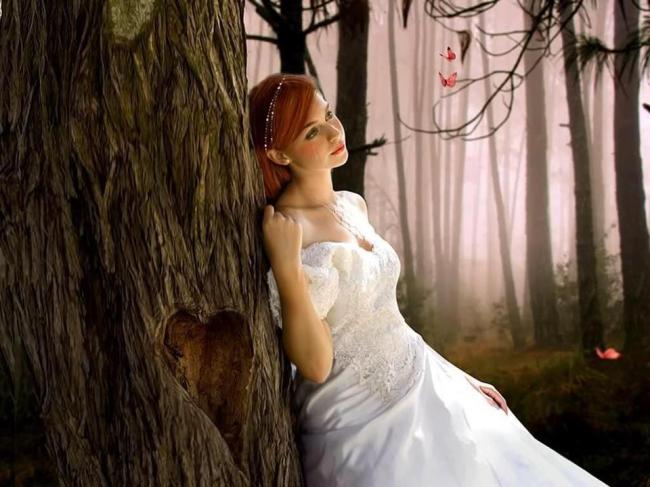 Abby  was in love, the fairy god mother tried her best to give her hints by impressing her thoughts but she was so much in love that she was blind to indications. 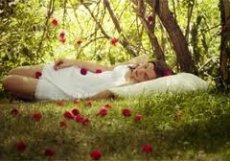 Soon she made him enter her house. Molly traced something was wrong with the man. He was not a man of his words. Fairy mother tried to warn Abby again through Molly by impressing Molly’s thoughts but it was too late by that time.

His first target was their parents, he casted a spell on both of them while they were coming back to home and killed them in a car accident.

Soon, the sisterly love for each other was ruined by Arnold; he was getting successful with his motive. He wanted them to be angry, very angry. The Witch Leona was very impressed by Arnold’s way of destroying the progress of the girls.

Molly started staying away from house, most of the time when Arnold was around she used to stay outside the house as something inside her could not digest the vibrations around. Molly used to talk to trees around but they too could not help; she started spending more of her time in garden.  The depression was taking her over. 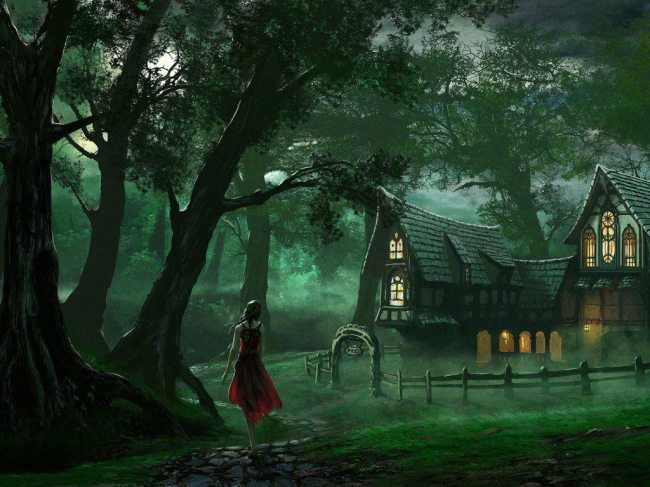 Fairy mother met God and asked mercy for these two girls. She told him how the condition was deteriorating and witch had casted her spell on them and the negative magic was  working on them.  She told God that it was Leona who casted her spell on these two fairies which had   lead them to human birth. God, in return asked Angels to help them as God is forgiving and kind.

He assigned his favorite angel from Arch angel’s Chamuel’s team Teeny to set things right. Teeny was full of love and the naughtiest angel but intelligent, Powerful and kind.

Teeny blew the kiss of love to both sisters instantly… that effect came on Abby as she suddenly went out looking for her sister… Unfortunately, the spell was more powerful   thanthe kiss of love. Arnold realized that someone was   trying to break his spell and he invoked for more of his evil powers and took Abby back to the same position. 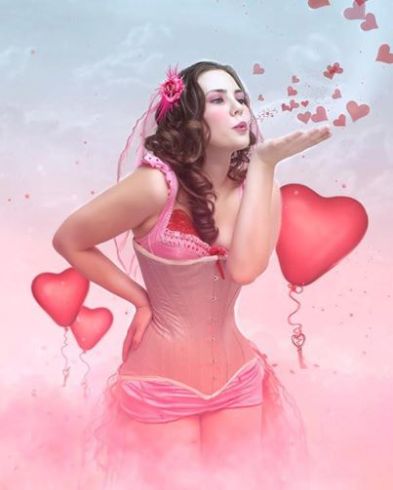 That made Teeny realize the power of negative spell, sherequested the presence of all the hierarchy of angels to team up and bless Abby and Molly 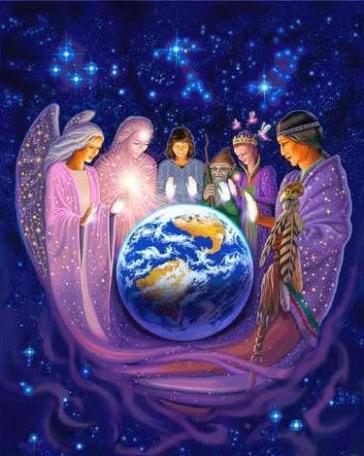 All the arch angels teamed up and looked into the situation and started blessing Abby and Molly. The power of prayer conjured up with the blessings, Molly prayed for her sister’s well being. She recalled their love for each other and  wore her clothes and started playing her favorite  flute… She tried to attract Abby by music which she enjoyed playing. As music cleared the negative aura she used this tool to clear the negative aura which surrounded Abby at that time 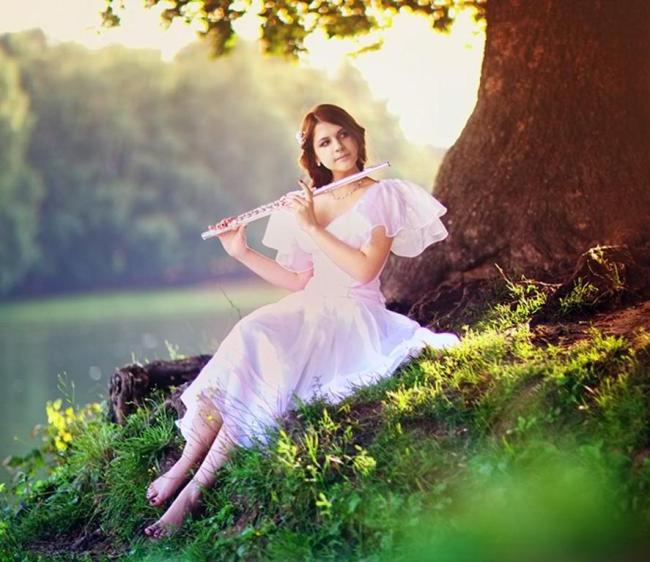 Love was beyond the right doings and the wrong doings.  The fairy God mother thanked God and the team of his Angels in helping them. But the witch Leona got irritated. She again tried to cast a spell and this time to kill both the sisters but Teeny was there to stop her from fiddling with their lessons as humans.

Molly was not aware of the war going on between the most powerful witch and angels and she kept on playing the flute recalling her childhood and the love both had with nature and suddenly, the magic happened she was surrounded by butterflies. 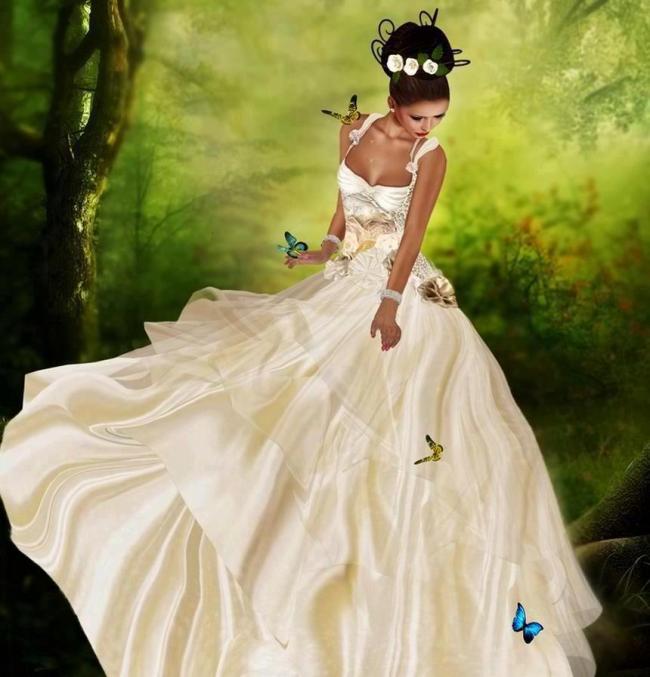 Suddenly, those butterflies started remind Molly about the incident occurred in God’s kingdom and realized that she and her sister were cursed and she immediately started repenting for her and her sister’s doings from her heart and cried for help and in few minutes she realized that the curse was now over. She had her wings and she could fly again. 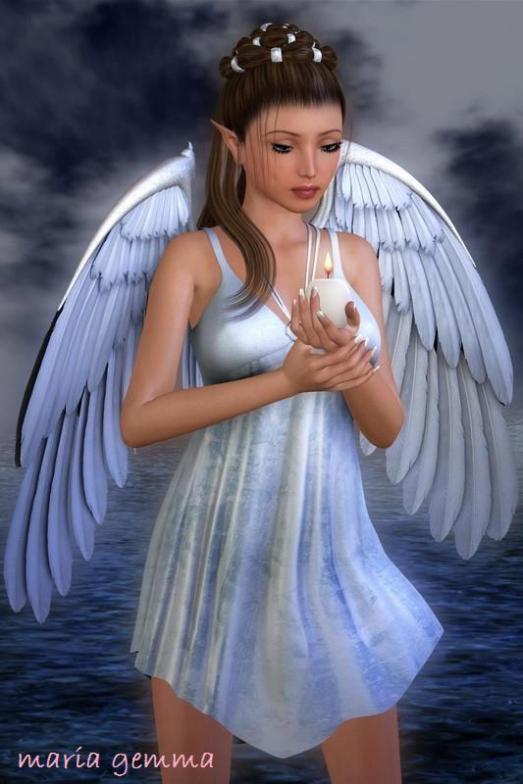 There test was over as human and it was time to fly back to the fairy world.

The Fairy god mother came and took both of them with her. The love the sister’s had for each other made them clear the test and the witch was arrested and kept in God’s prison. 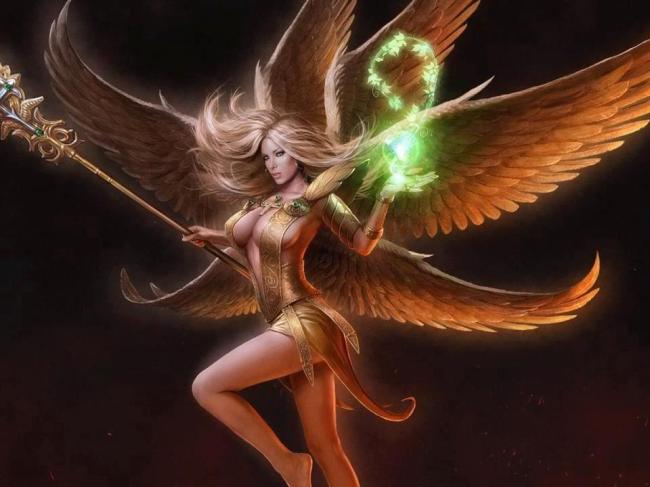 Once again God announced celebrations between Angels and Fairies and the happiness came back to their life. 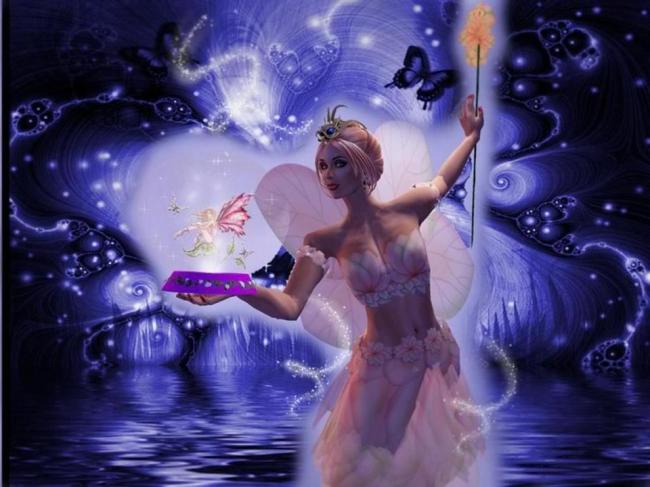 My books available at Amazon